[finally getting around to finishing this up – Andrew 5MAY2010] 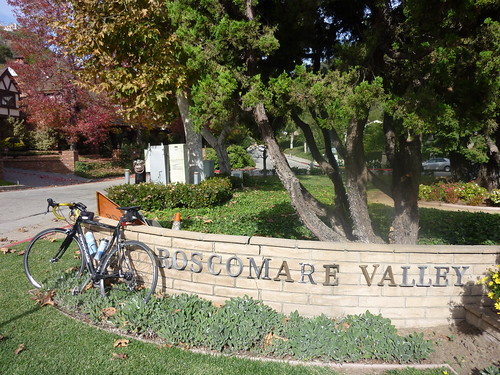 I had been looking forward to the Thanksgiving trip to LA for a long time. I was excited to see my family and friends, but what I really wanted was a chance to ride my bike over the territory where I grew up.
My family lived in the canyons of West Los Angeles, specifically Roscomare Road through the west gate of Bel-Air. We moved there just after I was born and I lived in the same house until I left for university 18 years later.
It was not a convenient place to live without a car. There was a no public transportation at all. I suppose you could have walked the mile to Sunset Boulevard and waited for a bus. But the ironically named RTD (“Rapid Transit District”) was so awful and went nowhere, it was just unthinkable.
There was no place to buy anything within a mile and a half. No shops. No convenience stores. Nothing. We had Bel-Air Foods at the top of Roscomare, more than 2 miles distant up a very steep climb and we had Bel-Air Shop Easy through the wining and dangerous hills to the west near the 405 freeway. Neither was a good option.
In the summertime, trapped in the house and desperate, my brother and I would choose one or the other and head out, sometimes on foot and sometimes on our little banana seat Schwins. Inevitably we ended up pushing the bikes up the hills and fearing for our lives around some of the tight corners. But the bounty of baseball cars, chips, and coke made it worthwhile. Sometimes.
Anyway, I hadn’t ridden a bike in Los Angeles in over 20 years and the prospect of rolling around the Santa Monica hills on my Cannondale was compelling me southwards.
I wanted to ride up Roscomare. Plain and simple.