Today’s ride was technically list as “BART” ride. You could take BART from Oakland down to the last southern stop at Dublin/Pleasanton. It would cost almost 8 bucks round trip, would take more than hour each way and would only get you to within 7 miles of the starting point in Livermore. So I drove. So did almost everyone else. Should have carpooled, but what the hell. 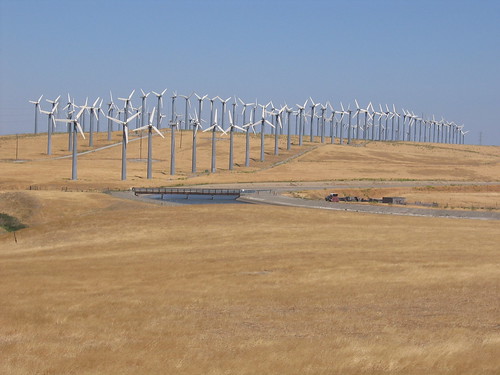 It was ugly morning. Cold, overcast and windy, but not raining. Despite this, there were about 100 riders assembled at the Safeway parking lot at 8am. Lots of fretting about the weather, so we didn’t get rolling til about 8:20 or so. Lucky for me because I needed that time to gear up, take a leak, and put some air in my tires. I also helped another club member get the PSI up in her tubes. She came over and told me she was having problems getting ait into her tires. I introduced myself. She introduced her herself as Angela, but I already knew that. It wasn’t any Angela. It was Angela Davis. Yes.That Angela Davis. Radical feminist turned cyclist. And, no, the irony was not lost on me, but I was happy to help.

This day was really the tale of two rides. The passages in and out had such different character, it’s a simple matter to mentally separate them. The culprit? The wind.
The area around the Altamont and Patterson passes is famous for the wind. The hilly pass which is situated on the path between the highway 5 and the Bay Area is studded with massive windmills to harness nature’s incredible power. This isn’t some new $130 barrel of oil thing. The windfarms have been around for years. There’s something like 5000 windmills. It’s an otherworldly sight. 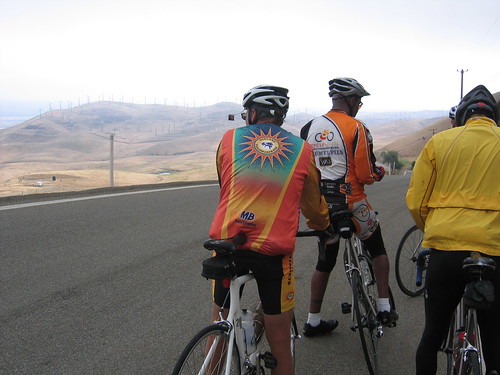 But this is “red” California country. Must have been some interesting meetings between the execs at Pacific Gas & Electric and the local elected officials to get the windfarms started in the first place, but I digress.
One look at the elevation profile, and you can see this was never going to be an easy day, but I had no idea what the fucking wind had in store for me. It was actually fantastic for me that the day started off cold and overcast. It made the climb up Patterson somewhat palatable. It starts out nice and gradual past the wineries and ranches of the Livermore backcountry. It’s tough, but doesn’t get really sick til the end when the grade kicks up to about 15%. It’s stomp on the pedals time for about 400 meters. I made it to the top, but I felt like barfing. I managed to hold it together and not spew my guts on the road, but just barely.
The summit of the Patterson pass is like a different world. Unlike the calm, cool of the ascent, the summit is being blasted by wind. The horizon is littered with winwills. Not hard to understand now why they put the mills here.
I had been wearing my rain jacket up the climb to stay warm, but I was sweating so much it was basically acting like a greehouse. When I hit the top, the cold was so intense, it was like two fronts hitting each other and I started to steam. I’m surprised it wasn’t raining inside my jacket.
There was a little bit of a regroup at the top as we waited for some of the stragglers. Then we hit what seemed like the never ending descent. At the top, the road was straight and smooth and since I was riding along with a few other guys I felt safe and let the throttle out. I hit 43.3 MPH before the curves in the road and the cross winds conspired to scare the bejesus out of me.
The wind was hitting so hard from my left that it felt like my front tire was going to slip out front under me. It’s sort of a disconcerting feeling at 40 miles an hour, so I slowed way the fuck down and cruised the rest of the descent which went on for many miles and regrouped with the elite riders at the bottom. 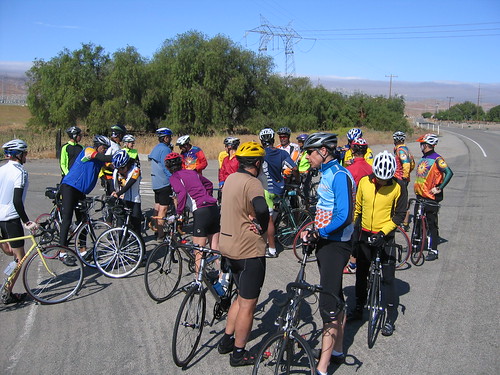 At this point, the wind was behind us and I was tagging along with the top riders in the club. For a good chunk of the way to the rest stop, we were cranking along at 35 miles per. It’s amazing what you can with a viscous tailwind. To put this into perspective. Top professional riders in the Giro average about 31 MPH on a perfectly flat time trial. Granted, the time trials usually go for 30 kilometers or so, but still, it was fast and fun.
By the time I was ready to say uncle and let myself get spit out the back, it was time for the rest stop/regroup in Tracy. And rest we would need because we’d be heading back into the teeth of the same wind that was propelling us at 35 MPH, only this time, we’d be going uphill. Welcome to the suck.
I honestly don’t know what kept me going. From the moment we left Tracy, it was just pure fucking, unadulterated misery. It was sunny and that was great, but the wind was so fierce, it was hard to keep the bike going in the right direction. I was fighting the bike and crushing the pedals just to maintain forward momentum and this was on the flats. 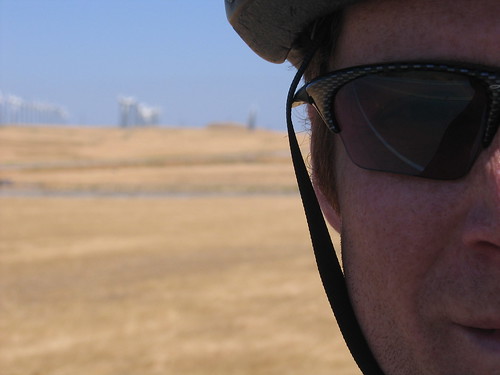 Up the hills, the blast force winds kept my velocity down to about 5 miles an hour. It’s about 5 miles to the summit, so you do the math. It was a long, hot, sweaty, insufferable ride to the top.
When I saw the building with a faintly painted “Summit Garage”, I knew we were near the top and the misery was coming to an end and was so grateful. There’s probably another kilometer of ups after the garage, but knowing that I was near the top buoyed me. I took the lead in the small group I was in and dragged them up the summit.
The descent down sucked too. I knew it would. Instead of coasting and having some time to recuperate, I still had the fight the wind. If I stopped pedaling, I’d come to a dead halt, so I had to power through. A few miles down the road and we’re back in Livermore amongst the vineyards and out of the dreaded wind.
We rolled by the Lawrence Livermore National Laboratory, where they make nukes. Seemed a peaceful enough place from the road.
We got a little lost in the last five miles on the way back to the Safeway. We missed the turn off back onto Patterson Pass Rd. It didn’t help that when we stopped to figure out where to go and I pulled out my Blackberry with Google Maps, I didn’t even occur me that I might not know which direction we were heading at the time. I thought we were heading west on the way to the starting point, but, ha, it turned out we were heading east. The exact opposite fucking direction. Oops. A few miles down the road, we realized my mistake and turned around. Not a big deal. At least we were out of the wind.
Finally we rolled into Safeway, and blessedly, the ride was behind us. There were some high points, some low points and it felt incredibly satisfying to be done.
Miles 53.64
Ride Time 3:57:14
MPH 13.5
Max Speed 43.3
Average Cadence 58
Here’s the route map: