I can’t sleep so I’m up searching for my photos from last weekend’s Wildflower Century up in Chico. There’s a company Photo Crazy who sets up triggered cameras at cycling events to take shots of the riders. There’s a big clock by the camera and you’re supposed to remember the time your pic was snapped so you can hunt it down later on their website.
I was a little delirious by time I rolled by their cameras after lunch, so I couldn’t exactly remember when the shots were taken, but I found them soon enough.
They aren’t messing around any more with the watermarks. I guess they figure that the new content aware functionality in PhotoShop CS4, they can’t be too careful.
They want 25 bucks for hi-res images of these shots which is a little stiff, but I’ll think about it. They’re not bad. Normally they give you advanced warning with some signage that you’re approaching the cameras. I might have just had my head down fighting the infernal wind, but I was totally surprised when I came across the cameras.
I’m not 100% sure that setting a camera with a flash to have a reflection street sign in the background was the wisest decision ever. They probably could have done without the transmission tower as well. Who makes these decisions? 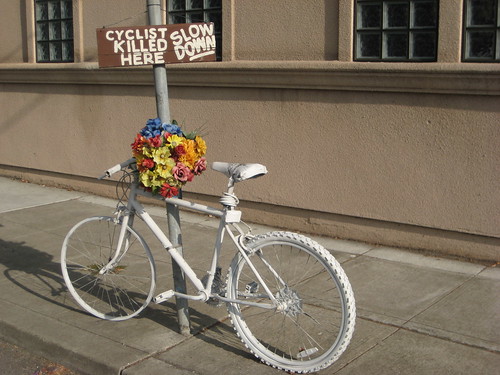 Almost every day I pass by this memorial to a cyclist killed by a car. It’s right around the corner from my place. It is always lovingly maintained. The bike has been stolen and is always replaced. The white bike is a stark reminder of how unsafe the roads can be and how dangerous my new hobby is. But the message is clear:
 SLOW THE FUCK DOWN OR YOU’RE GOING TO KILL US!
I try to be careful but as I share the roads with cars, there’s only so much I can do.
More photos here. 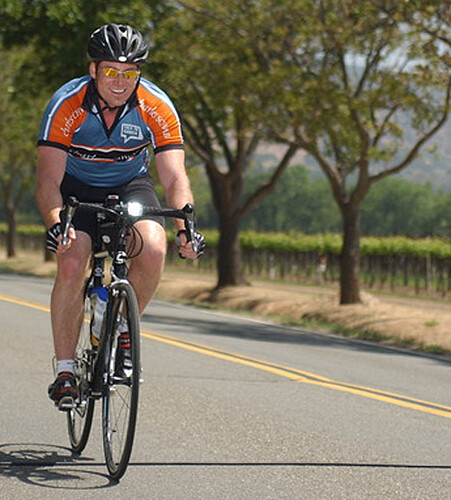