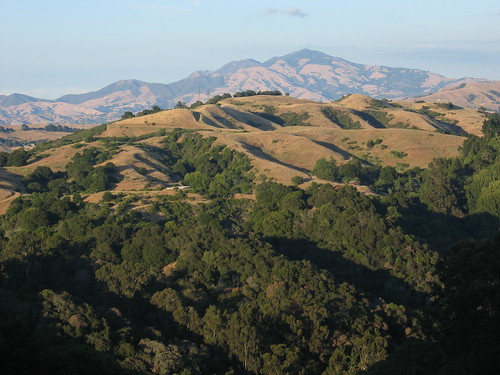 Mt. Diablo sits out in the middle of Contra Costa Country like a challenge to all cyclists. At 3879 feet, it’s easily the highest mountain in the area. It’s winding slopes are both daunting and enticing. It’s a hard enough climb if you start from the base, but today we started from Oakland (Emeryville for me) over 40 miles away.

Then there’s the final 100 meters where the gradual slope kicks up to a sickening 17% grade. To put that in focus the Col du Galibier in the Alps on a regular climb on the
Tour de France route is only 6.9% average. After 50 miles in the saddle, most of it uphill, hitting a 17% grade for any length of time will test the hardest of riders. 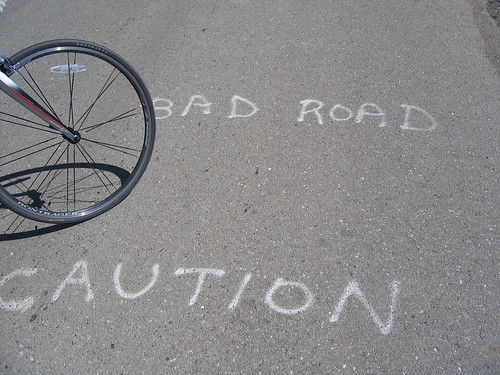 There were probably 40 riders or so who met at the lake and were going to to complete the whole ride. The Light riders leaving from the lake were only going to the Ranger Station at the halfway. The intermediates had taken the BART to Lafayette and skipped the Oakland hills which look like nothing compared to Mt. Diablo on the profile, but can be quite tough.

We had three riders visiting us from some club in LA. I talked to them a little at the lake and on the way up Butters. They told me they drove the course they day before, so they knew what they were getting themselves into, but after Butters, I never saw them again. Maybe they abandoned?

The route starts out very similar to the Palomares ride, winding through the Oakland hills up Wildwood, past the Mormon Temple in Montclair, on Butters to Skyline and then down Redwood Road. Instead of continuing on Redwood Rd to Castro Valley, we turn right up the south end of Pinehurst and down into Moraga. From there it’s fairly straight down the base of the climb about 30 miles away in Diablo.

Typically, when we started the ride, it was nice and cool. About 3 hours later at 11am when we were ready to start the climb, the sun was out and it was starting to warm up, not a happy situation. I wanted it to stay as cool as possible for as long as possible. 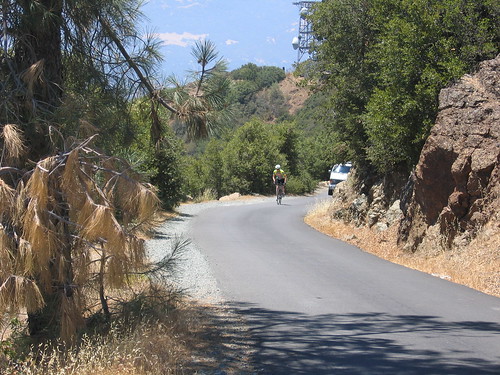 Back when I first got my bike in August of last year, I had gone hiking at Mt. Diablo. That was the first time I saw cyclist on the mountain. Actually I might have seen them before, but I probably didn’t notice, since I wasn’t one of them. We drove all the way to the observation tower at the top and on the way down there was a cyclist in our draft. Eventually he passed us and was just gone. He could descend far faster than we could drive. It was scary, but also kind of cool. I thought, after our hike, I’d give it a try – at least see if I could get up to 1000 feet.

That day was seriously hot, over 80 and though I had little problem getting to 1000 feet, I had serious problems getting down. I was new to the bike, had no idea how to the descend and the steep hairpin turns and the cars really freaked me out, so much so that I had to stop a few times, clip out and get myself together on the side of the road. I eventually got down, but it wasn’t any fun. 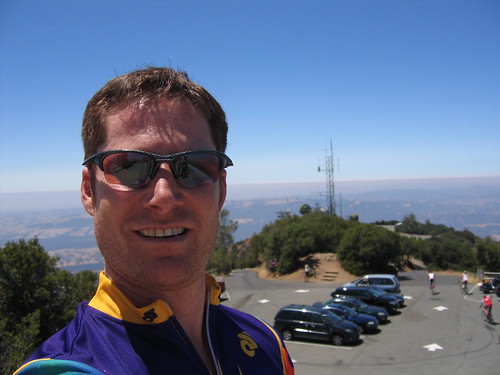 This time around, it was going to be different. I was a far more accomplished cyclist for one. For another we were going all the way to the top. I was also with a group. And we were starting from the south entrance instead of the north entrance. From what I understand, the south route is much more gradual. Both meet about halfway at the Ranger Station where one long ass 5-mile winding road leads to the summit.

We weren’t out to set any records. We just wanted to make it to the top. I was riding with Dan and we both set a nice easy rhythm and cruised up to the Ranger Station. I don’t know, but if I had to guess, I’d say the grade was about 5%. I had to get out of the saddle a few times around corners, but for the most part, it wasn’t too bad, just long and hot. You have to keep telling yourself that if you keep going, you’ll get there, even if it’s just at 7 or 8 miles and hour.

We took a nice long break at the Ranger Station, getting out of the sun and topping off the water bottles while contemplating the task the before us. There were a bunch of riders there, some from the Yellowjackets, some not. It was a little hub of activity. Riders heading up to the summit and down to the base and others just hanging out with us.

When it came time to head up the, there were about 6 of us together for the last 4.5 mile hike to the top, but that didn’t last long as the severe 8% grade started to peel riders off. If I had to guess, I’d say it was now hovering the mid-80s and there was no shelter from the unrelenting sun. But I was feeling pretty good nonetheless. 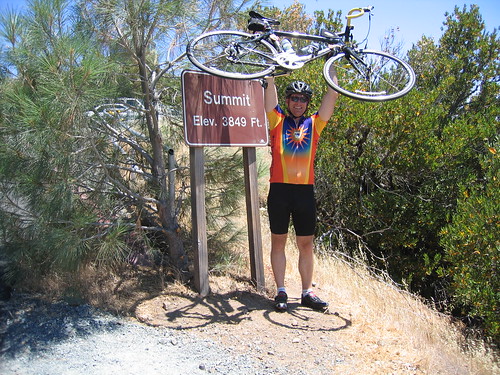 I kept checking my computer to watch the miles tick over. There was one minor false flat, but it was a serious climb in my lowest gear. I smiled at the riders descending at breakneck speed on the other side of the road knowing that soon enough, I would join them for the pain free descent.

We reached the bottom of final part of the ascent around mid day. It sits in front of you like a wall. There’s a trail of cyclists sadly pushing their bikes up along the side. I decided I had enough in me to attempt it, got out of the saddle and started pounding on the pedals. Dan was right behind me, but right as we were about the reach the top, I heard him click out. It took every ounce of energy that I had in my body, but I summited the climb without stopping but I was sucking wind so I hard all I could was get off the bike and the ground and lie down. It was fucking rough. A sadistic little hill at the end of a long climb of a longer ride. I was blown, but I made it!

After I started breathing normally, I grabbed a cold Gatorade from the little shop in the observation tower and I began to recover. There were probably 50 Yellowjackets up there. It’s really too bad that only about 20% of the club has the jersey because it would have been really cool to see us grouped up there on Mt. Diablo flying the club colors.

I took some pictures at the top, but it was really hazy. Supposedly on a clear day you can see the top of the Golden Gate Bridge to the west and Half Dome to the East. Must be amazing. But all we saw on this was a band of hazy smog on the horizon. Really sad.

I think were at the top about 45 minutes when most of the riders started to hit the road. I had Dan take that picture of me at the summit sign and then we took off—10.8 miles of descent. I’m still not a good descender and it really scares me shitless, but it beats the fuck out of climbing any day. The were some cars, and that made me nervous, of course, but I jut took it easy and descended at a reasonable pace.

I didn’t see the three riders from LA on the way down or at the Ranger Station. They either got lost, gave up or were just so slow that didn’t make the Ranger Station even an hour after we arrived at the summit.

The ride ends at the Pleasanton BART, but instead I rode on to Walnut Creek for a some Claypot Rice at Le Cheval. Yum. 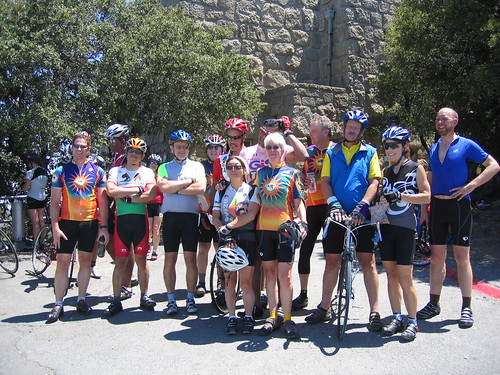 Every October there’s a race up Mt. Diablo called the Mt. Diablo Challenge. When I first heard about it, I thought it was one of the most insane things ever. But Now, after riding Diablo for the first time, the idea is actually appealing. One, it raises money for the preservation of the mountain, a state park, which is always a good thing. Two, it starts early in the morning, so it’s nice and cool. Three, instead of starting the ride in Emeryville and killing myself for 40 miles before I even get to the hill, this ride starts at the base. It’s just 10.8 miles. Lastly, you get a special