I was feeling pretty damn good on Sunday morning, so instead of doing my usual, sitting around doing nothing, I saddled and rode out to see if I could take on next week’s advanced club ride, The Dublin Grade. The ride itself is 62 miles, but it’s more than 5 miles from my place to the start finish line at the lake, so I was looking at 73 miles or so. I thought I could do it, no problem. Oops. 5 hours in the saddle later, I didn’t feel so smug about it.

The ride starts out easy enough. From my house to the lake and the first 18 miles that wind through South Oakland across to Alameda and over to San Leandro are all really flat. It’s early enough that there are few cars on the road. The sea breeze is really pleasant. No problem.
Then kicks up with a vengeance. First climb is up over the rise to Lake Chabot. The road is so smooth, but the climb is a slap in the face after 23 flat miles. Plus I was having some problems shifting, which I’ll talk about later. But the decent made up for it all. On a perfect road, newly paved, with no cracks, no manholes, no nothing but sweet smoothness, I was able to fly down sans my fear of wiping out. I was so psyched I forgot to look down at the speedometer.
At the bottom of Lake Chabot Rd., the route sort of winds around the flats of Castro Valley for a few miles and then kicks up again on E. Castro Valley Blvd and Dublin Canyon Road. At this point, it was starting to get late in the morning, the sun was beating down and I was starting to have some problems riding. Turns out it was a mechanical problem, but I couldn’t make more than 12 miles per hour on what seemed like a flat highway. Teams of cyclists were passing me. I thought I had bonked. Felt like I’d bonked and I didn’t find out until about 20 miles later at a bike shop in Danville that my rear tire was not spinning true, instead it was rubbing against the rear brake, I was fighting the heat, the hills and unnecessary friction.
The extra friction didn’t stop me from going downhill fast and on the descent into Pleananton, I hit a personal best of 38 MPH on another perfectly manicured road. Felt amazing to be going that fast. 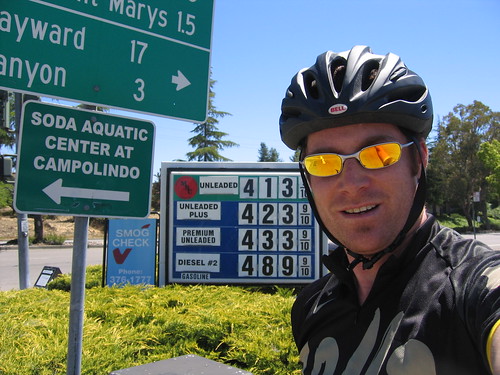 From Pleasanton, the route hangs left and follows the 680 past Dublin, San Ramon and into Danville. It’s a slow rolling rise, rather boring, but not all that challenging, even with the difficulty I was having with the bike. But 40 miles in, I was starting to get overheated. Both my water bottles were empty, so I had been hydrating plenty, but it wasn’t enough.
I met Jennifer for a 90 minute brunch at the Rising Loaf in Danville. By the time Jennifer arrived, I had sucked down 5 iced teas, 2 waters and an Arnold Palmer and I was still feeling dizzy. After an hour and a refuel of eggs and chicken apple sausage, I was ready to go again. Bottles filled with ice water, I was ready to roll.
The route leaves Danville on Danville Blvd, a ride that I’ve take many times and is perfectly flat, but the whole time, I’m thinking about Pinehurst. It’s getting hotter and the headwinds are starting to kick up. I’m not feeling it.
We wind through the outskirts of Walnut Creek, skirt along the edge of Lafayette and take a bikeway for 6 miles through Moraga. It’s rolling an pretty, but I’m losing power and starting to really feel the hours in saddle.
In Moraga, I stop at the same gas station we broke at during the Arlington Road ride. I sucked down a Monster Java, rested up, got my bottles filled again at the Jack-in-the-Box down the street and geared up for Pinehurst.
The 2 miles leading up to climb are unbelievably pleasant. Canyon Road winds through a cool redwood forest along a back road with almost no cars. It’s amazing to think that there are roads like this so close to my house. I think I’m about 10 miles from home here, but half of that is all pain.
When Canyon Rd. ends and Pinehurst begin, gone are the redwoods and their restorative shade, replaced by brutal heat and winding switchbacks that get steeper as you get closer to the summit. Riding Pinehurst fresh first thing in the morning would be tough, but riding Pinehurst now, at the end of a 70 mile ride was an absolute killer. Somehow I cowboy’d up and managed to make it all the way to the top without stopping this time. But I was dead to the world. I clipped out and crashed in the shade, sucking wind like a mad man. 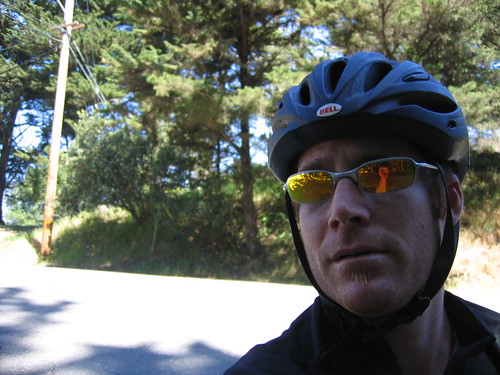 I think it took me about 10 minutes of lying in the shade by the side of the road to recover. The descent from the top was white knuckle exhilaration. It felt so great to be done with the hills. I knew that if I could just stay on my bike, I’d make it home and have completed, what for me was, an epic journey.
Miles 73.01
Ride Time 5:21:22
MPH 13.6
Max Speed 38
Flats 0
Here’s the route map in all its evilness: