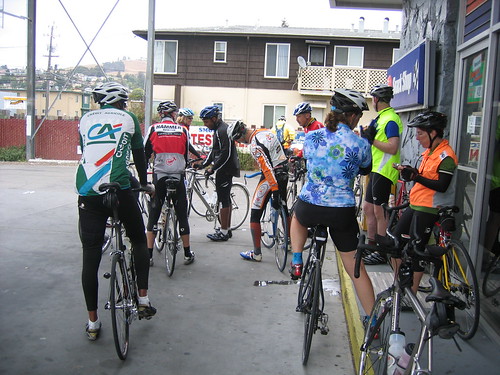 When I woke on Saturday, I said say when Mak woke me on Saturday morning, it was miserable outside. The sky was steel grey and a mist like rain was falling steadily. No chance I was going to ride today. Right.
But I had to go Lake Merritt to pick up one of my gloves that I left in the back of someone’s car after last weekend’s ride in Sonoma. My bike and gear was already in my car and I threw a couple of water bottles and a rain jacket in just in case and took off for the lake.
It was still nasty as fuck when I got to the lake. On a typically saturday morning at 8am, there are more than a 100 Yellowjackets getting ready to ride. Today there was less than 25. Not hard to understand why. The sky was pissing rain. It was about 60 degrees and the prospect of a long ride in those conditions was not promising.

I found Dan, grabbed my glove and was ready to leave when he started to convince me to come along. Aw, come on. It’ll be fun. The rain won’t last. Blah blah blah.
Now, I’ve been watching the Giro on Italian TV all week. The weather lately has been downright miserable. The best cyclists in the world have been battling it out on the roads of Italy in the driving rain. I figured I needed to see what it was like, so I geared up, got some air in my tires and joined the group.
I also wanted to see if the ride would be any different than last week’s solo Dublin Grade ride when it was hovering around 100 degrees. So off I went.
The first third of this ride was flat which is a damn good thing because the rain was slamming us pretty hard for the first 10 miles and going up and down hills in the rain is not something I really wanted to experience. By the time we hit the first rest stop at about 18 miles in, the rain had stopped and the roads were almost dry.
A few of the novice riders peeled off and we were left with about 20 before the first of the ride’s three climbs, Lake Chabot. Unlike last week where I struggled to the top, today was a piece of cake. The descent was super fast on the clean, dry roads. Instead of dying under the heat, I was kicking ass. The difference: a mere 30 degrees in temp.
The route wound through Castro Valley and then up the Dublin Grade. I cruised up and didn’t hit 40 MPH on the descent because my jacket was creating too much wind resistance. We had a brief regroup at the bottom of the grade. One rider had a flat and Michelle had a minor wipe out going about about 15 MPH, no real damage, but enough to scare the shit out anyone.
The group was starting to dwindle. There were maybe four novice riders still chugging up the Grade and several riders headed off to the Dublin BART to catch a train home.
The next leg up the Danville through San Ramon breezed by. The advanced guys were pulling a mean pace and I was tracking along until we got separated by a red light at the edge of Danville. We never saw then again.
That left a group of 5 riders, Dan, Tom, Alfred, me and Michelle. We pitted at Peet’s to grab some coffee. Just to make the day complete, Michelle had a flat. She was headed for the Walnut Creek BART anyway.
None of the remaining 4 riders in my group had the route map, so it was a good thing I had ridden it last week. I led the group through the residential streets of Walnut Creek, Lafayette and Moraga to the base of Pinehurst where Alfred departed.
At this point, I actually felt pretty good, unlike last week where I was fucking dying. After a short break, I was ready to tackle Pinehurst. Tom and Dan, both at least 20 years older than me, killed me going up, but I made it in one piece, without stopping and didn’t even need a break at the top. Felt great. My heart rate only went up about 20 beats a minute from 155 at the bottom to 177 or so at the top. Maybe I should have pushed it harder. I don’t know, but it felt excellent to have the hard part of the ride over. It was all downhill from here.
We zipped down Sheppard Canyon and hit 40.9 MPH on the bottom section where the road is newly paved and perfectly straight. Incredible.
It was a great ride. Although I thought I’d regret setting off, I was really happy that Dan had egged me into coming along. As always after a ride like this, I was beat, but it was accompanied by a feeling of great accomplishment.
Here’s the math:
Miles 65.75
Ride Time 4:36:05
MPH 14.2
Max Speed 40.9
Average Cadence 61
Flats 0
Here’s the route map: