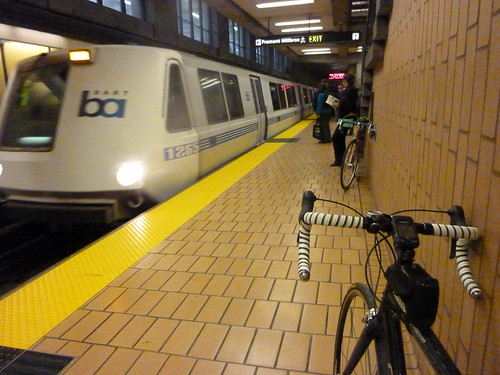 I weighed my options and decided to go to Red’s, but there was not a soul there. Time to hammer it up the Embarcadero and hope that my fellow Yellowjackets were in a law abiding mood, which I certainly wasn’t. I whizzed past the Ferry Building, Alcatraz Landing and into Fisherman’s Wharf. No sign of any riders. Around Aquatic Park, up Fort Mason and down into the Marina, I finally ran into to Dan who was waiting for me just outside the Presidio.
Just a quick note about the weather at this point. It was cold, but not terribly so since I was dressed for the conditions. It was windy, but not awful. The clouds looked very ominous. Black, low and moving fast. The forecast only called for a 10% chance of rain, but I knew that was really optimistic. Looked more like 100% chance as we plowed on through the Presidio and crossed over the GG Bridge. 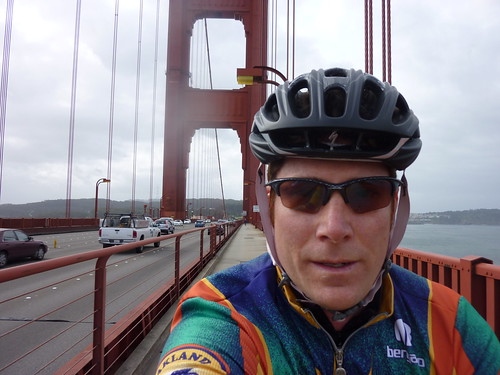 I saw Fred waiting at the beginning of the bridge path, but never saw him again. Down in Sausalito, we ran into a few of the advanced riders, Richard, Tom and Joan plus a few that I didn’t recognize, but we lost them when we had to make a pit stop at Mike’s Bikes. We picked up George and waited for Fred and some of the others to arrive, but it was too cold to wait for long so we continued down the bike path fully expecting to see them in Fairfax, but it wasn’t to be.
We roared up and down Camino Alto at which point there was a decision to the made. Hang a right through Corte Madera and do the Tiburon ride or keep going on Magnolia and do Mt. Tam. The skies were threatening serious downpour at this point, so it was tough to convince Dan and George to come with me, but they eventually succumbed to my Pollyanna charms. “Look, it’s clearing up ahead…It doesn’t look so bad…Only 10% chance of rain…”
Within a few seconds the sprinkling started and by the time we reached Larkspur, just a few miles down the road, we were in the midst of a serious downpour and had to take shelter under a roadside tree.
The rain was hard but short and we saddled up again and enjoyed this pleasant stretch through Marin to Fairfax where about 20 bikes were piled up against the Fairfax Coffee Roasting Company, but not one of the belonged to a Yellowjacket.
Fairfax is a great hub for cyclists because it sits at the center of so many routes. You can head east through Olema or Nicasio and onto Point Reyes Station and points beyond. You can head south back the way we came and into San Francisco. You can head west through San Rafael and into China Camp or, like we planned, you can head up into the mountains and climb Mt. Tam. Inside a melange of the lycra-clad set and earth-toned hemp wearing locals are sipping coffee and listening to some guy sing Neil Young covers. We had breakfast (cappuccino and egg & cheese on an onion bagel for me) and waited for others to arrive. But none didWe had breakfast (cappuccino and egg & cheese on an onion bagel for me) and waited for others to arrive. But none did. 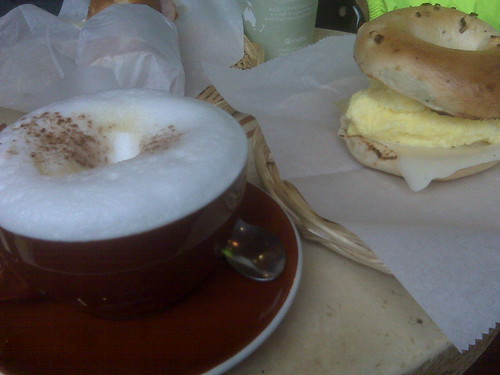 After about 45 minutes, it was decision time. Continue up to the Mt. Tam knowing that we were going to be wet, cold and a little miserable or head back the way we came, knowing that we might be wet, cold and miserable, but we’d be home home and dry in a few hours. I wanted to keep going and somehow I convinced Dan and George to come with me. It wasn’t raining when we departed Fairfax and there was even some patches of lighter clouds that looked benign, but the low dark ceiling or clouds promised nothing but more rain. But I wasn’t going to let that stop me from enjoying Fairfax-Bolinas Road.
Fairfax-Bolinas Road is possibly the nicest cycling road in the country. It snakes up through the foothills on the north side of Mt. Tamalpais at a farily gradual rate. There are some sections around 8-9%, but there’s nothing too steep. Cars are few and far bewtween. On weekends, even on a rainy day like today, there are far more bikes than cars on the road. Redwoods, Birch and oaks line the road at various points and the vistas through the uninhabited areas of Marin are spectacular. There are sections of rolling hills, hairpin turns, rapid descents all culminating at the breathtaking pine-shrouded Alpine Lake, which looks like it was lifted from the Tyrolean Alps and dropped into Marin.
As we climb the lower section which rises almost 1000 feet in 3.8 miles (average grade: 4.74%), the rain is coming down steadier advancing from what the a Brazilians call garoa, a light misty sprinkle, and right through to a full-fledged drizzle. Waterlogged cyclists coming the other direction are looking determined and a little miserable, which is what I imagine I look like. The sweat is pouring off my brow. Rain is dripping from my helmet. Mucus is leaking out of my nose. I could probably wring a a few cups of water from my socks. Under normal circumstances I would cursing my fate and ready to give up and turn around, but the surroundings are so exquisitely beautiful, and the road virtually empty, that I just feel blessed to be able to do this ride. This is what it feels like to be a cyclist in Northern California.
My new drive train is working like magic and I feel like a jackrabbit. I continue on to the dam for a well needed break. 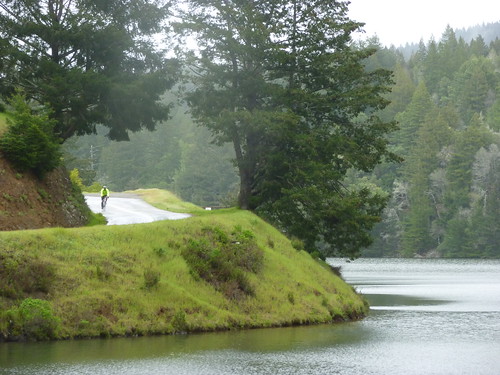 Even though the rain has stopped, we don’t stay long because we don’t want to get cold. Dan and George arrive right behind me and we get going while our engines are still warm. From the dam, Fairfax-Boilnas pitches up sharply as it meanders through the redwoods. It’s only about 2 miles to the miles but with the gain of 787 feet, there’s a serious grade of 7.1%. Nothing to trifle with.
It’s cool, dry and quiet inside the protection of these massive trees. It’s like riding inside a natural cathedral. About halfway up, we get passed by some dude on mountain bike. He’s covered in mud, but flying up the road. We’re all impressed.
At the top, we gird ourselves for the last bit of the climbing, the Seven Sisters, a series of rolling hills and steep climbs on Ridgecrest Blvd. On a clear day, the views of the Pacific are inspiring. Today, not so much. While we can see some waves splashing on the beach way below us through the low clouds, mostly we are looking at a blanket of fog. At points along the ridge, the crosswind blowing the fog across the road are so strong, they threaten to knock us off the bike. It’s less than pleasant. I’d take the rain over the wind any day. But then, before you know it, we’ve summited and there’s nothing but a plunge of several miles down into Mill Valley. Sheer relief.
The descent was treacherous on the wet roads so in the interests of self-preservation, I took it fairly easy, especially on the 15% section that comes as an unpleasant surprise right near the bottom. We all made it down fine, peddled through Mill Valley and took a well-deserved coffee break at Cibo in Sausalito, a place that has Time frames hanging in the window so you know cyclists are welcome.
The sun started peeking out as we rode back through Sausalito proper and by the time we hit the bridge, it was out in full force. There were the usual nuisances of the wind and the bike tourists to deal with, but it feeling the rays of the sun on my face was a unexpected surprise. From the bridge, it’s a long reach across the city through the Presidio and along Bay Street to the Embarcadero where the ride finishes by the Ferry Building. 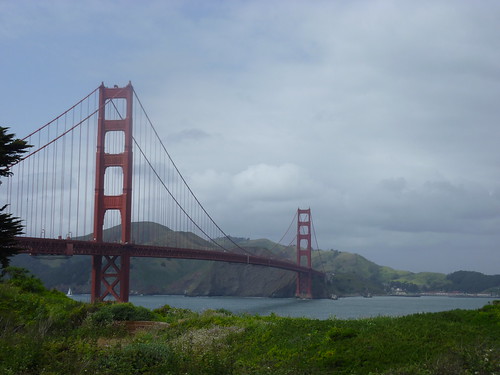 It felt fantastic to be done with only a short BART ride between me and hot shower. Dan and George were great company, the ride was wet and challenging, but simply gorgeous. I can’t really ask for more.
Miles 59.23
Ride Time 4:19:10
MPH 14.0
Max Speed 36.6
Elevation Gain 4,619 ft
Flats 0
More detailed ride stats here: