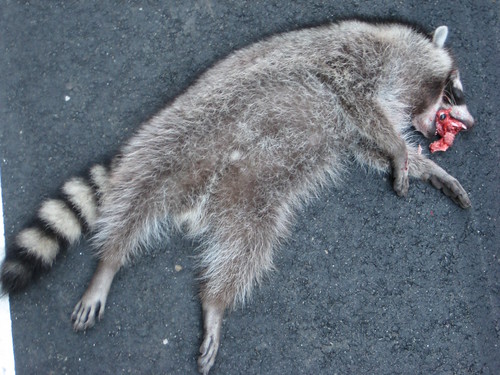 I the ride last weekend in Marin, I stopped and took some pictures of a on the side of the road near the bridge on Pt. Reyes Petaluma Rd. I passed the raccoon and turned around to take pictures.
The poor guy had his head crushed, probably by a passing car. Road kill is a fact of life out on the roads we travel and there is a never ending stream of coons, squirrels, deer and other small rodentia flatened on the backroads of Northern California. When you cycle along the edge of these roads, you’re going to come across more than your average share of road kill. That’s just the way it is.
My fascination with all things cycling and all things photography have a macabre junction in the pics of the road kill. I can’t help myself. If it’s interesting, I’m going to take a picture of it. And road kill is interesting, mostly. And this freshly killed raccoon, with the exception of the coagulated blood around it’s mouth, was beautiful. So I shot it. A few times. Then, as always, I uploaded the photos to Flickr and forwarded them to my club and didn’t think any more of it.
Normally, I don’t get any responses, but the raccoon touched a chord and quickly I got back responses from the sublime to the absurd, starting with the absurd.

I don’t know about anybody else, but I for one am totally disgusted and offended by you showing us “road kill” up close and personal! Spare me in the future, please!

This is from an adult, not a 6 year old, but you’d never know that.

I turned off the slideshow at the Raccoon shots. Editing is an art.

This one actually offended me. Blasting my editing skills? I edit for myself and share because I’m asked. Why would I edit out a photo of my photoset that I actually stopped and turned around to take? I wouldn’t. The fact that it never even dawned on that adults would have a problem with is not my problem. It’s their problem. We’re not in fucking nursery school anymore, are we?
It’s not that I’m insensitive to people’s feelings, but we’re talking about my photos. If you don’t like them, move on. Don’t insult me or pretend to be offended. If you’re so easily offended, stay at home. I didn’t kill the raccoon. It was there on the road, to be seen by any and all passersby.
Then there were more like this, which are just plain stupid:

With the exception of the photos of the dead racoon, I’d say this was a great group of pics….

I should stay out of this one, but to me the cows are way uglier than the raccoon.

I didn’t see that during the ride. I’ll assume the tandem pair of Reese and Myra mowed that down at 49/mph when they were attacking the rollers on the way to the Cheese Factory.

You kidding? The racoon carnage was the first thing I looked at. And I’ve yet to even look at all the rest.

Hi Andrew
I thought I would just e-mail you directly, as there are already more than enough club comments re: the raccoon photos. I personally was interested to see the photos…it’s not all that often you have the chance to see a wild animal that is not trying to run away from you, or that has already been flattened by a car.  I always appreciate being able to see their shape, colors, etc. up close!
P.S. Did you see the deer skeleton just past the Cheese Factory? Same thing- I would have liked to stop and admire it, but I know the people I was riding with would think that was too weird.

Good to know that they are some sensible people around. Again, it’s just a photo.