So the Tour de Cure went off without a hitch, I’m happy to say. I had a great time. Made the 50 miles (or so – the route was actually only 47 miles and change) without any trouble. Hard to beat cycling through Napa with friends, meeting new people all while raising money for the American Diabetes Association.
It was an early start. I was up at 530 to get everything ready and left at 645 for the hour drive up to Yountville in Napa. It was foggy and cold, which didn’t make me too happy, but it would burn of eventually, so no big deal, right?

I met up with Zach and got myself registered (bib number 803 in case you’re scoring at home). There were riders everywhere getting ready for various rides – 100, 50, 25 and 10. Bikes were stacked up all over places. Lots of tents for sponsors, lunch, ADA, vendors, first aid, etc. Crazy scene.
I picked up my Schwab jersey at our corporate tent. We were joined up by Becky, also on Team Schwab, and we hit the road just after 8am. As soon as we got up to speed, it was freezing. I had picked up some “sleeves” and was damn glad I did because they kept my arms nice an toasty. Otherwise I probably would have been miserable.
We rolled through the quaint, upscale towns of Yountville and St. Helena, mindful of the stop signs as we’d been warned that the local constables were looking to nail riders. Nothing better to do. Lots of early morning strollers out for breakfast before they headed out for a day of wine tasting. Not exactly hard core felons. Probably a few restraining orders between them, but not much else
There were rest stops every 12-15 miles or so which was really nice. Got to take a break, get off the bike and fuel up. At the first stop it was still overcast and cold.
After around 25 miles or so of heading north, we hung a right and passed by one of my favorite wineries, Clos Pegase just after the second rest stop. The sun came out and it was just spectacular. Plus we were off the main road and away from most of the traffic. Perfect. 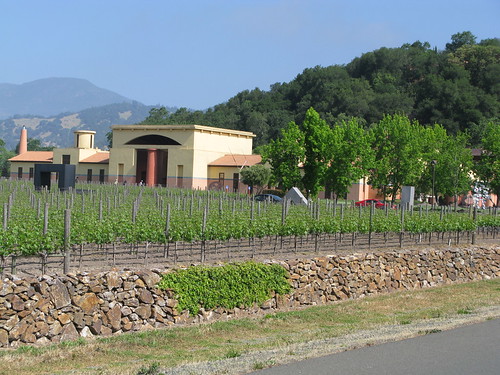 After a brief jaunt to the east, we headed back south to Yountville and into the teeth of the wind. I fought the wind up and down rolling hills past sprawling vineyards and wineries. The hills were small, but I did hit 30 MPH cranking down one of them. By the time we hit the final rest stop at around the 35 mile mark, I really needed a break. I had been hydrating more than I needed and really had to take a leak.
The rest stop was more like a social event with all the riders doing the 25 miler decamping for peanut butter and bananas on bagels, pretzels, sports drinks and bars, oranges and bananas. The sun was out. Everyone was happy to almost be done, not because it wasn’t fun. It was. Just looking forward to the sense of accomplishment.
The last 15 miles (or so) was actually really easy for me. I was passed by a group of 4 riders and hooked on the end of their train and tagged along at 21 MPH for most of the way, leaving my riding mates in the dust.
I decided to wait up for them towards the end so we could hit the finish line together. I finished the 47.54 course in 3 hours 4 minutes and 10 seconds at an average speed of 15.4 MPH with a cadence of 59. Not bad. Would have like to have to gone 50, but I can’t control the course.
Lunch was brisket sandwiches, beans and ceasar salad. Not exactly Napa fare, but I didn’t care I needed the calories. I stuck around for the team photo, then headed out of Dodge and crashed for the rest of the day on my couch, totally spent. 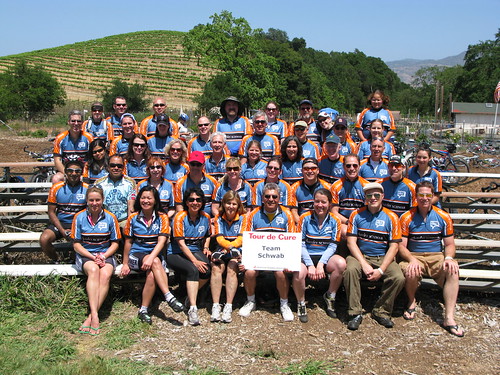